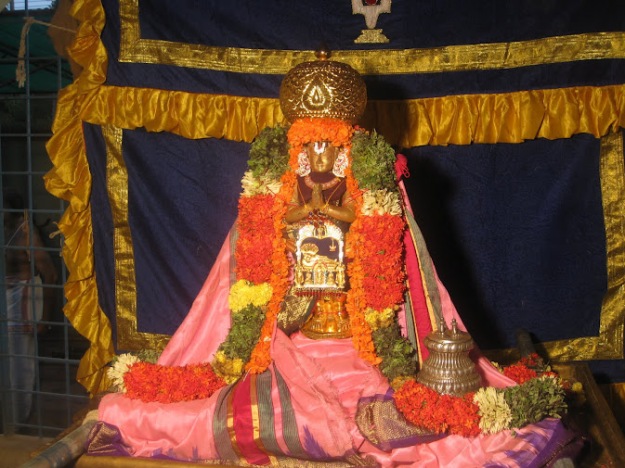 Place where he attained paramapadham: mannAr kOyil (near thirunelvEli)

kulasEkara AzhwAr’s greatness lies in the fact that he was born in kshathriya kulam (which is condusive for having great ego) but was still so humble in his attitude towards emperumAn and bhakthas. It is because of his great devotion and attachment towards perumAL (srI rAman) he came to be known as kulasEkara perumAL himself. In his perumAL thirumozhi, after performing mangaLAsAsanam to periya perumAL in the first padhigam (iruLiyach chudar manigaL), he immediately glorifies srIvaishNavas in the second padhigam (thEttarum thiral thEn). He is also popular to have been so attached to srIvaishnavas which we will see in his charithram in the subsequent sections.

Oh srIvEnkatEsa! You are the one who can eradicated my strong karmAs. I want to be like the stepping stone at the entrance of your sannidhi where your great devotees, dhEvas who expect material benefits from you and their dependants are longing to take your dharshan.

periyavAchAn piLLai explains that the jIvAthmA should be both like

This principle is called “achithvath pArathanthriyam” meaning jIvAthmA being fully controlled by emperumAn and still reciprocating with emperumAn – this is the highest principle of our srIvaishNava sidhAntham.

We have already enjoyed how mAmunigaL glorifies kulasEkara AzhwAr in his archAvathAra anubhavam article –  http://ponnadi.blogspot.in/2012/10/archavathara-anubhavam-kulasekara.html.

nAyanAr in his magnum opus AchArya hrudhayam explains that one should not discriminate between devotees based on their birth in a series of chUrNikais and establishes the greatness of nammAzhwAr and other great personalities in the end. In that section, while explaining the greatness of the births which is condusive to bhagavath kainkaryam, nAyanAr cites the example of how various great personalities opted/desired for so-called low births only because of the reason that those births are very condusive for kainkaryam. Let us see the essence of 87th chUrNikai and how this relates to kulasEkara AzhwAr.

The nithyasUris like ananthan, garudan, etc., opts to take birth as bed (AdhisEshan), a bird (garudAzhwAr), etc. nammAzhwAr identifies how thiruththuzhAi is so dear to emperumAn that he wears it everywhere (on his head, shoulders, chest, etc). Great sages like parAsara, vyAsa, sukha, etc., desired to be born as the dust of vrindhAvana which gets touched by the lotus feet of krishNan and gOpis. kulasEkara AzhwAr desired to be born as anything in thiruvEnkata hill. ALavandhAr desired to be born as a worm in the house of a srIvaishNava. Let us see kulasEkara AzhwAr’s desire in a little bit detail as explained by mAmunigaL in the vyAkyAnam of this chUrNikai.

He desires to be:

Such was the greatness of kulasEkara AzhwAr, he was fully craving for bhagavath/bhAgavatha sambandham without any personal expectation.

With this in mind, let us see his charithram now.

srI kulasEkara perumAL was born in the kingdom of kollinagar (thiruvanjikkALam) in the kshahriya vamsam an amsam of srIkausthubam as shown in dhivya sUri charitham by garuda vAhana pandithar (though AzhwArs were handpicked from samsAram by emperumAn and divinely blessed by him). He is also known as kolli kAvalan, kozhiyar kOn, kUdal nAyakan, etc.

Being a great king, he was thinking to be fully independent and the controller of his rAjyam. srIman nArAyaNan who is the supreme controller of both paramapadham and samsAram, out of his causeless mercy, blessed him blemishless divine knowledge, removed his rajO/thamO guNams and made him fully situated in sathva guNam and revealed his divine svarUpam (true nature), rUpam (form), guNam (qualities), vibhUthi (his wealth/controlling power) and chEshtithams (pastimes/leelais) in detail. Seeing that and understanding the same, AzhwAr became greatly anguished to be in the midst of samsAris who are fully indulged in bodily aspirations without any interest in bhagavath vishayam (spiritual matters). As nammAzhwAr declares that great material wealth is like big fire which will destroy the owner himself by indulging him in just more and more material aspirations, kulasEkara AzhwAr had no attachment to his rAjyam (kingdom) and stayed aloof from everything like srI vibhIshaNAzhwAn gave up all his wealth and surrendered to srI rAman.

He developed great attachment towards srIrangam and srI ranganAthan and more so towards the devotees of srI ranganAthan  who are completely detached from worldly affairs and spend their time only singing the glories of srI ranganAthan. He wanted to live amidst such srIvaishNavas who are called sAdhus (vaishNava agrEsa: – leader of vaishnavas) and the ones who are identified as “anNiyaranGgan thirumuRRaththu adiyAr” (அணியரங்கன் திருமுற்றத்து அடியார்) meaning the devotees who spend all their life in srIranganAthan’s temple. Understanding that srIranga yAthrai and the desire to go to srIrangam itself will give paramapadham what to speak of living in srIrangam, he lives everyday thinking about going to srIrangam.

Also, he developed great attachment towards thiruvEnkatam (thirumalai) which has the swAmy pushkariNi that is glorified to be greater than the holy rivers gangA, yamunA, etc. As ANdaL also speaks about “vEnGkataththaip pathiyAga vAzhvIrgAL” (வேங்கடத்தைப் பதியாக வாழ்வீர்காள்) meaning we should live in thiruvEnkatam as our eternal residence where great sages and mahAthmAs stay eternally, he also has the same desire. As we have already seen in the beginning, he desires to be a bird, a plant or even a stone on this dhivyadhEsam. Beyond this he also desires to live in many dhivyadhEsams serving the archAvathAra emperumAn and his devotees there.

After analysing and observing the various purANams, ithihAsams, etc., he blesses with a great sanskrit slOka grantham named mukundha mAlai. As the greatness of srIrAmAyaNam is explained in the following slOkam: 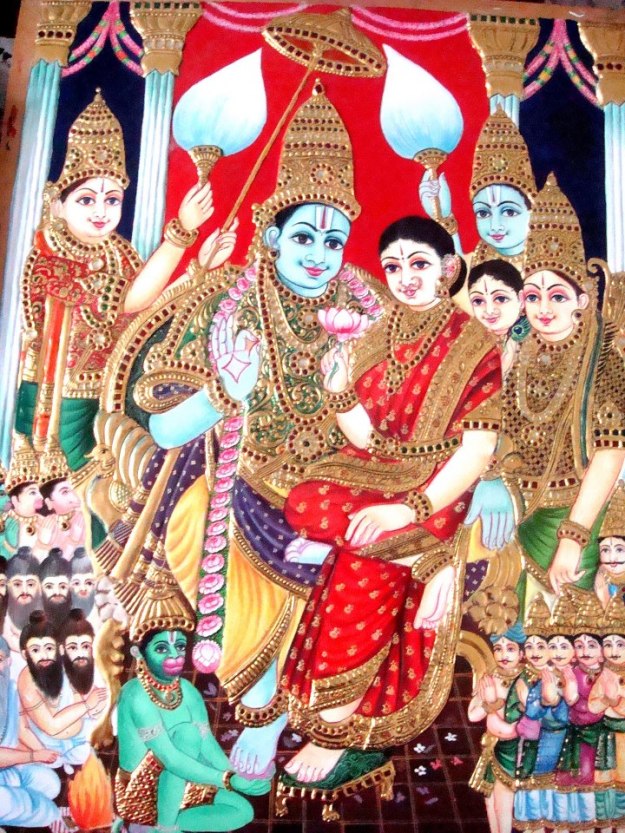 AzhwAr took up listening to srI rAmAyaNam and discoursing the same as his daily routine. He becomes immersed in srI rAmAyaNam that some times he forgets even who he is. Once when the lecturer explains the sequence were 14000 rAkshasas under kara/dhUshaNa prepare for a battle with srI rAman who leaves sItha dhEvi under the protection of iLaya perumAL (lakshmaNan) in a cave and all the rishis become very scared seeing at this situation where perumAL is single handedly taking on 14000 rAkshasas, AzhwAr being overwhelmed with emotions, at once orders his army to get ready for the battle and march towards the battle field to help srI rAman. Seeing this, some of his ministers, arrange for a few people to come from the opposite side and inform him that the battle is already won by srI rAman and sIthA dhEvi is nursing his injuries by tenderly attending him and he need not go any more. AzhwAr being satisfied, returns to his kingdom.

His ministers then start thinking about AzhwAr’s behaviour and decide that this is an outcome of his association with the srIvaishnavas. They decide to drive the srivaishnavas out and devise a plan for that. They steal one of the diamond necklace from the thiruvArAdhanam room of AzhwAr and proclaim that his close confident srIvaishnavas must have stole it. At once, AzhwAr orders for a pot with a venomous snake placed in it and once it arrives, he puts his hand inside and declares that “srIvaishnavas will not indulge in such acts” – the snake does not bite him due to his honesty and the ministers feel ashamed, return the necklace and beg for forgiveness from AzhwAr and srIvaishnavas.

Subsequently, AzhwAr starts feeling greatly anguished living amidst samsAris as stated in saunaka samhithai that “For a prapanna, being with people who dont glorify bhagavAn is worse than being amidst a ball of fire”. He then crowns his son as the king of the kingdom and hands over all the responsibilities and declares that “AnAtha chelvaththu arambaiyargaL thaRchUzha vAnALum chelvamum manNnNarachum yAn vEnNdEn” (ஆனாத செல்வத்து அரம்பையர்கள் தற்சூழ வானாளும் செல்வமும் மண்ணரசும் யான் வேண்டேன்) meaning He no longer desires to rule great wealth surrounded by many servants and entertainers. He then leaves to srIrangam with his close srIvaishnava friends and performs mangaLAsAsanam to srIranganAthan who looks like a diamond placed on golden plate (him lying down on AdhisEshan) and who is always looking out for the welfare of everyone. He glorifies emperumAn every moment and as a result of his outpouring emotions, he compiles perumAL thirumozhi and blesses that to every one and thus uplifted them. After some time he leaves this samsAram and reaches the divine abode of paramapadhanAthan and eternally serves him there.

For any comments/questions/feedback, please contact sarathy.thothathri (at) gmail (dot) com